The Smok Alien 220W kit is the newest addition to the series of top-quality vaping products from the Chinese manufacturer Smok, or Smoktech.  Since they released the immensely popular X Cube 2 just last year, the company has been pumping out new and innovative devices almost monthly, without compromising one bit on quality. The Alien 220 kit is no exception. In the kit is a high-power mod that has a maximum output of 220W, along with the new Baby Beast tank, which is just a smaller version of the acclaimed TFV8 Cloud Beast. You can pick one up now at https://caktusvape.com/

he Alien 220 kit comes to you in the usual Smok packaging; a big rectangular cardboard box that’s sealed in plastic wrap. The box will contain one Alien 220W box mod, one TFV8 Baby Beast tank, two Baby Beast coil heads, a bag of spare o-rings, which are for the tank, a spare glass tube for the tank, a USB cable for the mod, and a the much welcomed user manual.

There is absolutely no doubt that the 220W Alien box mod takes the spotlight of this kit. Since I’ve reviewed about a dozen Smok vaporizers in the last two years, I have absolutely no problem saying that this device is probably their best looking one to date. It’s measurements are 85mm in height, 44mm in length and 30mm in width. The Smok Alien is surprisingly compact for a dual-18650 battery unit. Its design, rounded corners, along with its positioning of the vent holes, and zinc alloy case with a matte black finish are just superb. If you’re a mod connoisseur, then most likely you will probably see a bit of the IPV4 and the Siegelei 213 in the design of the Alien. When it’s all said and done, Smok’s new flagship does indeed boast quite a number of distinctive features that will easily make it stand out from its competition.

One of the cool new features is the firing bar that Smok has been using on its devices as an alternative to the classic power button for a few years now. It all began on the X Cube 2, and it has since become a staple of Smok design. It is also used on the recently released OSUB Plus and H-Priv. The firing bar on the Alien 220 has been seamlessly integrated into the overall design of this mod. In the previous review 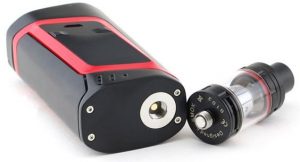 s that I have done of Smok devices regarding the use of the firing bar mechanism, I many times brought up the issue of accidental firing, either when it was that you were holding the device in your hand or maybe storing it in a tight pocket. Simply locking the device is a good way to prevent this from happening, but reality is that sometimes we just plain forget to do this. The firing bar on the Smok Alien requires a considerable amount of pressure in order to activate it, so the chances of firing the device by mistake are quite low.

Another great distinctive feature of the Alien 220W is its huge OLED screen that displays an abundance of very useful information. You’ll find a current wattage/temperature setting, the selected Smok-vaping effect (Soft, Normal, or Hard), the exact level of charge for each of its 18650 batteries, real-time voltage indicator, the resistance of the atomizer, the mode that you are using the mod in (wattage or temperature control), amperage, the temperature of the internal motherboard, a puff counter, and yes, even a puff timer.

There are definitely other mods out there that will give you all the above listed info, but what makes the SMOK Alien 220 unique is that it will display all of this information on the screen at the same time, instead of you having you to go into the menu and check each feature separately.

Located directly under the big display, you will find a micro-USB port that is used for firmware upgrades. This port cannot be used for charging the device, so if you are planning on getting the Alien 220 and you do not have an external battery charger, I strongly suggest that you get of those as well.

And lastly, on the top of the Alien 220W, you will find a classic 510 connection whose positive pin is gold-plated. The connection is absolutely flush on the mod and just deep enough to allow for the TFV8 Baby Beast tank to screw all the way down, You will not  have even the tiniest gap between it and your vaporizer.

If you’ve picked up the new Smok Alien,  e-liquids from Halo would without a doubt be the perfect pairing for this device. There are several flavors that you can choose from which include Twisted Turnover, Tribeca, Kringle’s Curse, and Mystic Menthol. These premium  American- made e-liquids will surely stand-out and not disappoint. Halo e-juices are available at Cactus Vape for just AUD $24.95 (30 ml).

Why Make Your Own E-Liquid?

area nearby get thee

Purchase a book that